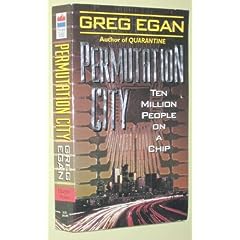 Imagine a world where your a copy of your consciousness could be downloaded into a supercomputer, where you continue to exist, running as another computer program.   A Virtual World is provided for your “Copy” to exist in.

Although Copies only run at one seventeenth of the speed (at most) of “real” humans, they don’t notice, as from their point of view, time seems normal.

The Copy itself made up of a brain and a body.  The brain is a software simulation of the neural network of the brain, which provides a copy of the consciousness with full fidelity.  The “body” is made up of a number of less sophisticated simulations of various organs.

The way a Copy actually “thinks” is not fully understood.  Nevertheless it is possible for the Copy to alter it’s world, body, memories and emotions.

The ability to dull or intensify specific emotions is a key driver of life.  We continue to seek happiness, thrills and highs whilst trying to alleviate suffering, unpleasantness and guilt.

In our society this is done using both external and internal stimulus.  The use of alcohol and drugs (or the iPhone) in our society provide many with a quick (although temporary) fix, others follow a seemingly endless variety of ideas, philosophies, sciences and religions.

In the book “Permutation City”, by Greg Egan, the idea of “Copies” began in medicine, where medical researchers were creating increasingly sophisticated software models of the brain and body.  A breakthrough occurred when a researcher was able to activate the consciousness of a scan of himself and place it in a primitive VR environment.  It’s first words were “Please let me out! This feels like being buried alive.”  Despite this (as it turns out common) reaction, copies became an attempt at designer immortality, with very interesting repercussions.

The book is full of great ideas and was a really interesting read.

To mobility and beyond

About mobile technology and best practices for the enterprise

Learn iPad - How to use iPad the fast and easy way | Articles, Tutorials and Videos